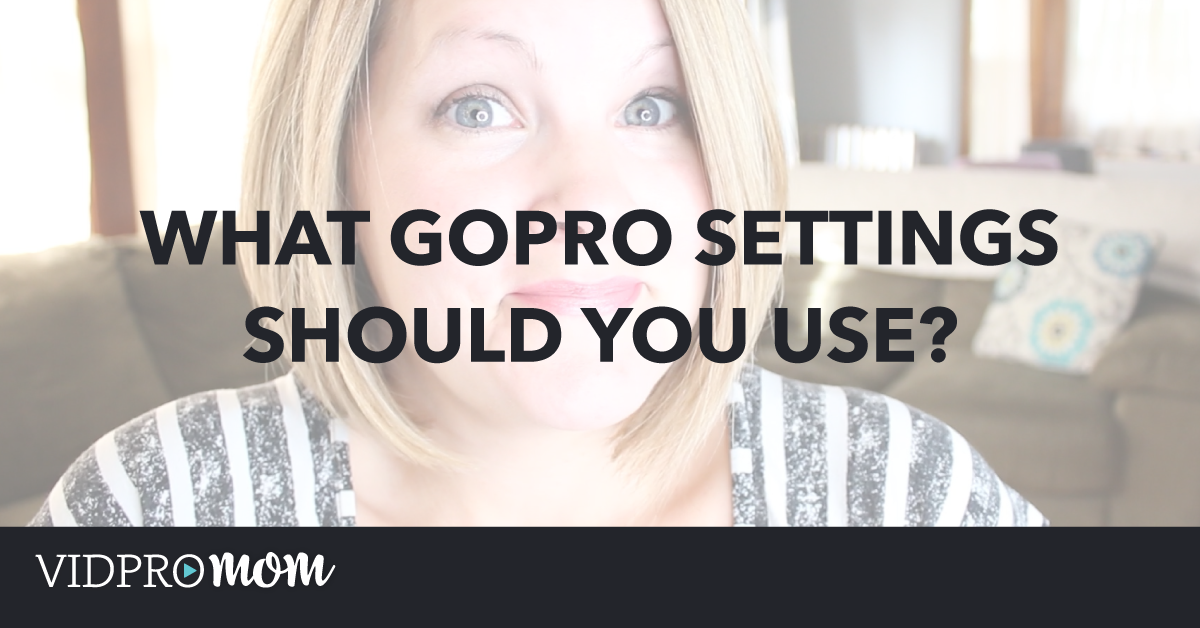 I get the What GoPro settings to use question a lot and honestly, I never like answering it because the answer is always “it depends”… and nobody likes to hear that! But this post will help you learn the settings and figure them out on your own.

My goal is not to tell you what GoPro settings you should choose because the thing is… you have to understand for yourself what the settings mean and how your shooting situation will affect your results.

What GoPro settings to use

But for reference, I will tell you that I shoot my GoPro videos at 1080/30fps with Protune off, let’s explore the reasons why.

Let’s talk about resolution. Depending on your GoPro model, you have many different resolutions available: 4K, 2.7k, 1080, 720. Those numbers represent the number of vertical pixels. So for example, a 1080 video is 1920 pixels wide by 1080 pixels high. I see a lot of questions and comments from folks who think “hey, let’s shoot the highest possibly quality and the highest possible frame rate!” and then wonder why it takes 3 hours, 47 minutes, and 13 seconds for their the computer to import footage and render their clips while they’re editing.

The higher your resolution, the bigger your file sizes are going to be (so, less space available on your memory cards and hard drive).

My computer (with 2.9 GHz processor and 8 GB of RAM) chokes on 2.7k and I’ve never shot anything in 4K before, ever. What I mean by “chokes” is it feels like forever to move the files off the memory card and onto my hard drive, and to import into my editing software, and to convert if I’m using GoPro Studio, and even then, even when I get to THAT point, the playback is often choppy because my computer is trying to keep up.

By the way, why did I get a computer with only 8 GB of RAM?? I’ll be putting more memory on my GoPro Christmas list for sure.

So I shoot in 1080 because it’s High Definition, it works with my computer, and I’m happy with the end results. Some day, maybe a decade from now, I may all be shooting everything in 4K, and I look forward to that day, but we’ll also be using faster, more capable computer to process that much data when we’re editing.

GoPro Frame Rate – Which One to Choose?

30 frames per second is what many people would consider to be the “standard” frame rate. Movies are usually shot in 24, and often you’ll hear that shooting 24fps will give your video a more cinematic feel (but at the same time, doesn’t the scene and the lighting and music and the acting talent also attribute to a more cinematic feel?)

Shooting at 60 frames per second has a couple of advantages, but, back to my original point, it depends what you’re shooting. For example, if you’re shooting something fast-paced like a skateboarder doing flips or kids jumping into a pool, shooting at 60fps will prevent motion blur and if you know you want to slow down your clips when you’re editing (so they’re in slow motion), then shooting at 60 fps is a good idea. Your slow motion clips will be nice and smooth.

That’s not to say that you can’t slow down 30fps footage, you totally can… it’s just that if you shoot in 60, your end result will generally look smoother.

So, I shoot in 30 frames per second by default, and if I feel like it (and if I think I might want to slow down my footage later) I bump it up to 60. But, like with higher resolutions, my computer chugs along with 60 fps when I’m editing, so I don’t use it often. I also don’t shoot a lot of fast action stuff either, so that’s why 30 fps is my default setting.

We talked about shooting at 60 frames per second if you’re shooting a fast-moving subject, but the same idea applies if you or your camera moving fast. Shooting at 60 fps will reduce blur if you’re shooting scenery from a car, or shooting from a drone and panning your camera quickly up, down, left, or right. Shout out to Scott Thomas in the GoPro Enthusiasts Facebook group for making that very valid point.

And like with higher resolutions, the higher your frame rate, the bigger your file size is going to be, so take that into account as well.

YouTube now allows you to upload videos at 60fps, as long as they are shot in 1080 or 720. So if you choose to shoot and edit an entire video at 60fps, you can export it at 60fps and upload to YouTube for all the world to see.

GoPro Protune or not?

Let’s talk about Protune for a moment. Generally, I shoot my GoPro videos with Protune off. I think GoPro’s internal software does a fine job of adjusting colors and exposure and whatnot, so I don’t mess with it.

Some people swear by using Protune and then manually edit their exposure, contrast, white balance, and color when you’re editing. I just don’t. I let GoPro do it’s thing, and edit those things if I feel that’s it’s necessary.

So let’s review:
I shoot at 1080/30/Protune off because I feel that for me, in most situations, it provides the best possibly looking footage with the least possible amount of time and digital space.

At the end of the day though, guys, as they say in photography: the best camera is the one you have with you, and in this case, the best settings are the ones you’re using when you press record and capture some amazing moment, or memory, or experience, and then bring it home and edit it into an awesome, fun to watch video that will can be shared with friends and family and last forever and ever. You can quote me on that one. 😉

Play with your camera and you settings and see what GoPro settings to use for yourself.