Home » Should I Buy a GoPro as a Family Camera?

Should I Buy a GoPro as a Family Camera?

So you have a family, and you’re thinking about buying a GoPro camera. Spoiler alert: The answer probably is yes. But let’s address some frequently asked questions, bust some myths, and address some downfalls of owning a GoPro camera before you run out and buy one for your family. (The links in this post are affiliate links, and we will be compensated when you make a purchase by clicking our links. Read my disclosure policy here.)

Have you ever seen GoPro promo video or commercial?

Did it have a surfer in it?

Are your a surfer?

I’m not a surfer either. I’m just a regular person who likes to capture my family’s life adventures and turn them into home movies. That’s sorta the gist of VidProMom, in a nut shell.

One of the things that influenced me to start VidProMom.com was the number of people–moms, dads, regular people–who looked at my GoPro and said some form of: “Oh I’ve been wanting one of those. Does it record audio? Is it waterproof? What does it do? Tell me about your camera. How much are they? You mean you can’t see what you’re shooting? ”

There are some BIG mysteries behind such a small camera. 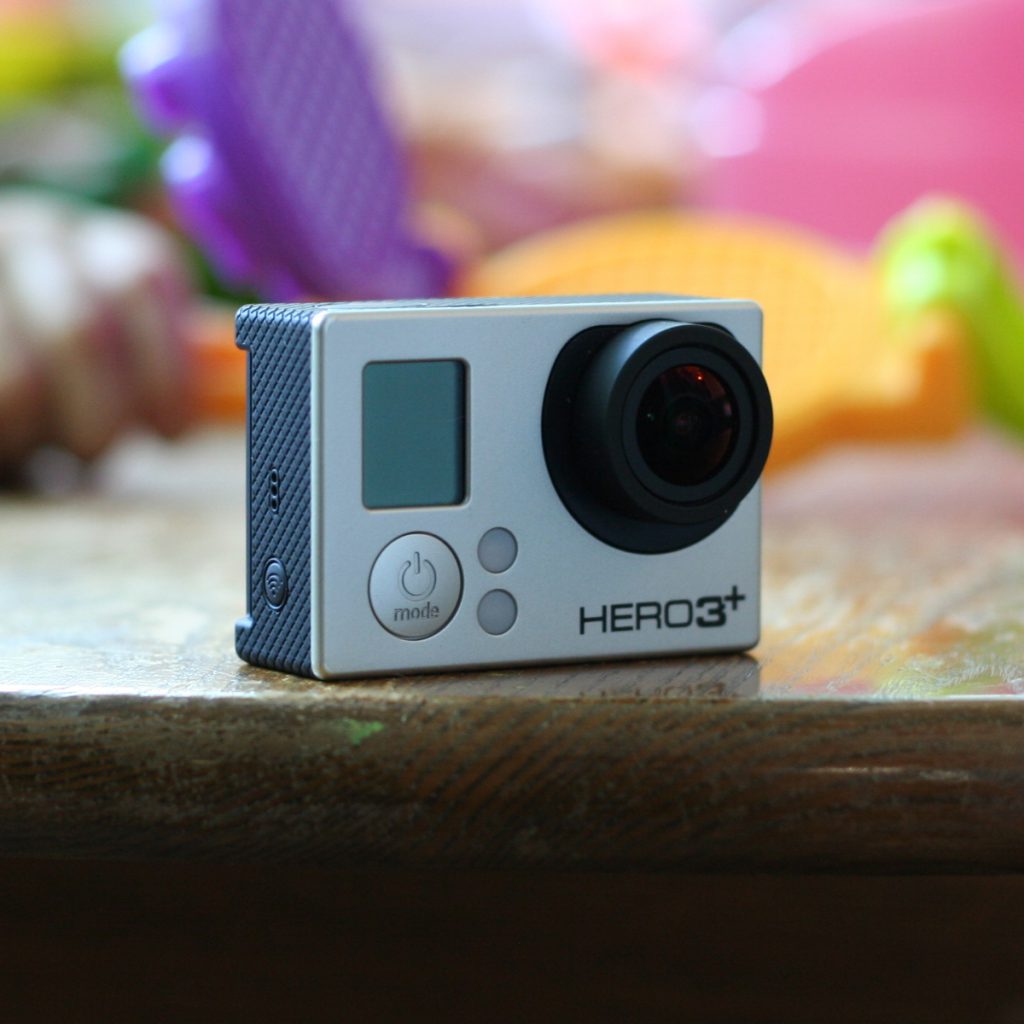 So let’s bust some myths and break things down–for regular people–who want to shoot family adventures and the like. I personally own the Hero 3+ Black Edition, which means it has all the bells and whistles. Currently, there are Black, Silver and White editions on the market.

Edit [2/21/15]: Since this post was written, GoPro released the Hero4. The newest line of GoPros consists of GoPro Hero, GoPro Hero4 Silver, GoPro Hero4 Black. The line of Hero 3’s are still currently on the market too.

GoPro cameras come with a clear plastic waterproof housing. When they are in that housing, yes, they are waterproof and well protected. I swam across a lake with mine, have shot video of the kids in the pool, and taken it down the Aqua Duck on the Disney Fantasy cruise ship. 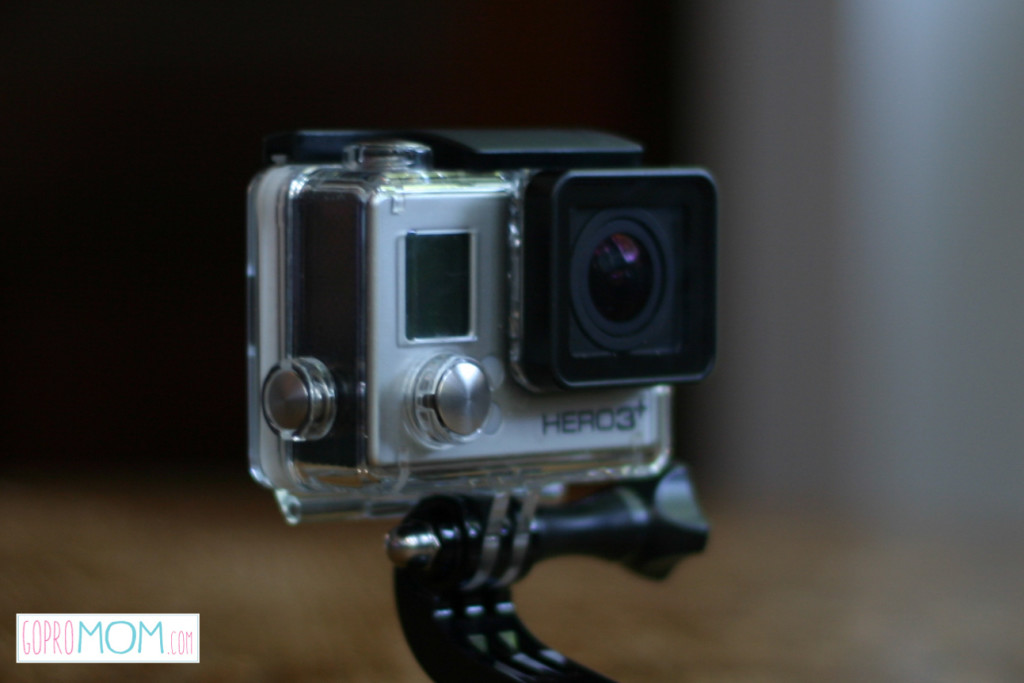 GoPro in the waterproof housing – GoProMom.com 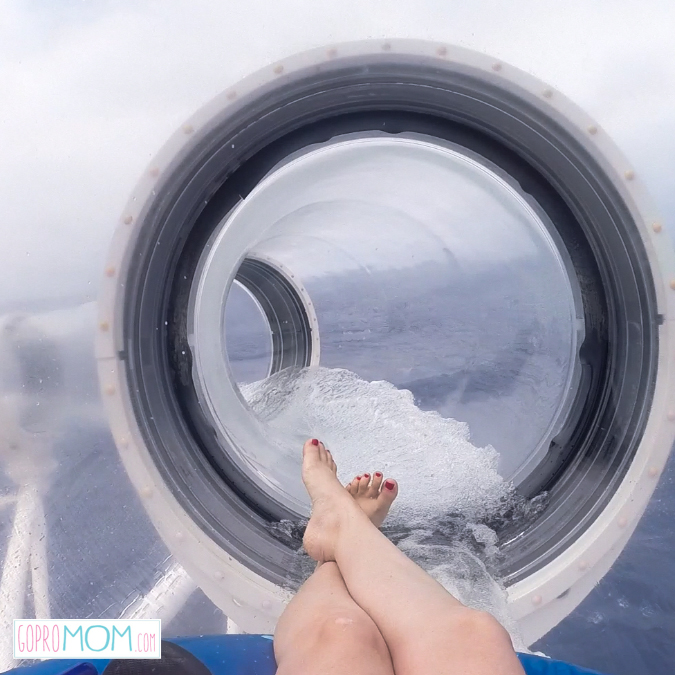 GoPro cameras shoot video (yes, with audio) and still photos. What makes them versatile is the number of options and settings available to you with the touch of a button. You can shoot HUUUGE videos for a movie screen or small videos to upload to Facebook with ease. The highest resolution for still photos on the Black Edition are 12 megapixels. That’s gigantic.

You can also set the camera to shoot time lapse…meaning you tell the camera to take a still photo every 5 seconds; or every 30 seconds, etc. Let the camera do it’s thing for a while–like a sunset for example–and you can put all those still photos together into a movie. It’s a popular thing these days.

My Hero 3+ Black Edition was $399. The GoPro comes with the waterproof housing and some mounts. All the other mounts you’ll need are sold separate. Head mount, suction cup mount, tripod mount are all sold separate.

By the way: I find it odd a camera wouldn’t come with the ability to attach to a tripod, right out of the box. But you can buy a tripod mount, or better yet – I LOVE this little guy: 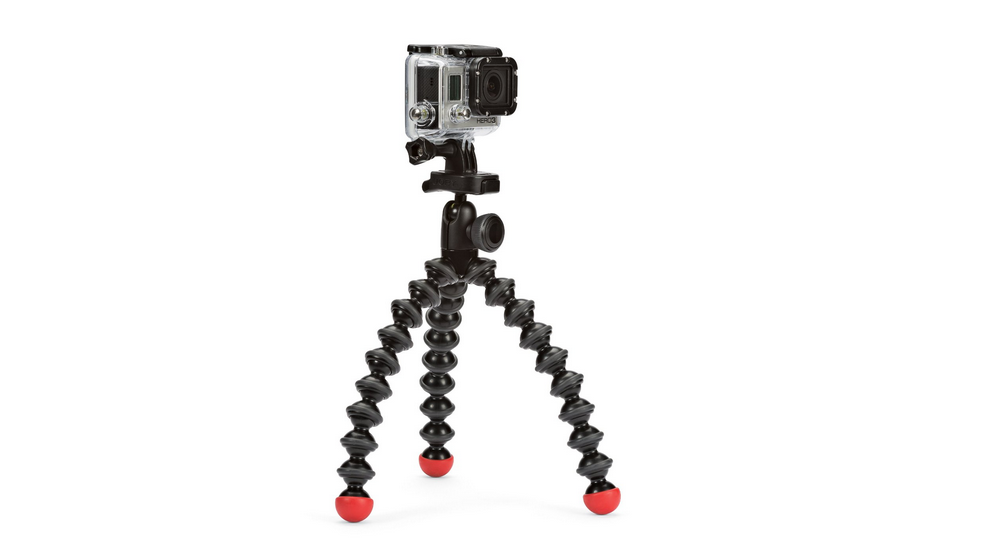 He’s small and flexible and designed for the GoPro.

One of the hurdles people have a hard come overcoming is the fact you can’t see what you’re shooting on a GoPro. There’s no screen on the back. 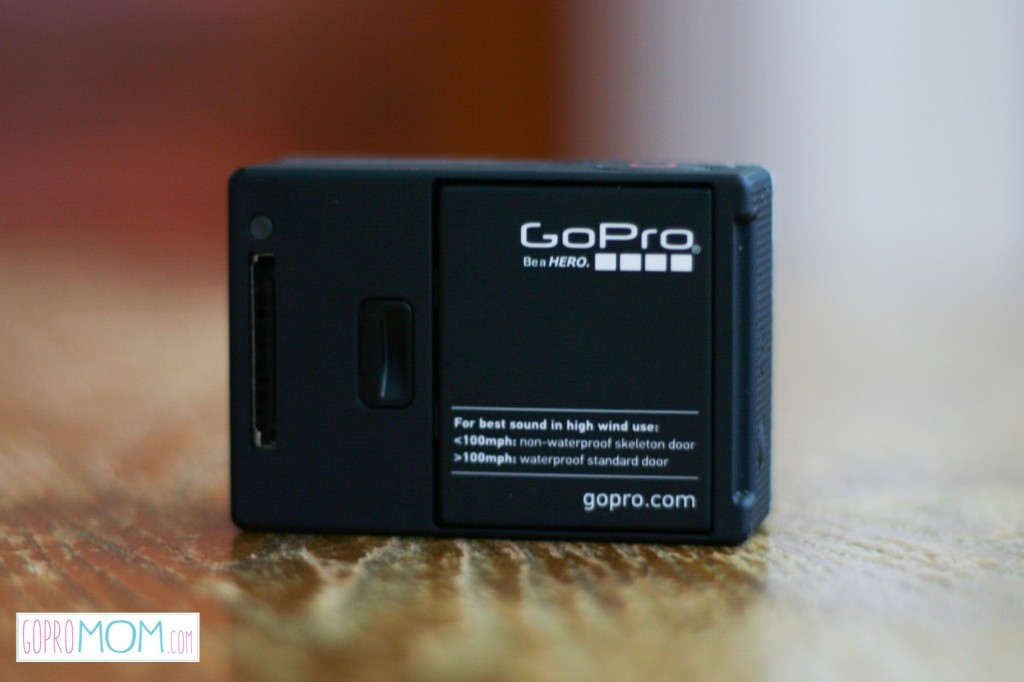 No Viewfinder – back of the GoPro camera – vidpromom.com

GoPro cameras have a wiiiiiide angle lens. You’ve seen the “fisheye” effect right? GoPro footage often have a kind of warpness to them because the angle is wide… it’s curved like a fisheye in order to capture a bigger, broader shot.

Because of the wide angle, you can generally just point the camera in the right direction and hope for the best.

Do I nail that every time? No. But for the most part, I’m happy to get what I get because it’s better than nothing… right?

If I haven’t satisfied the control freak inside of you, there are ways to see what you’re shooting. The GoPro LCD Touch BacPac for HERO3+ is one, or, use the GoPro App (it’s free!). You can use it as a view finder, plus change all your settings, check your battery level, and so forth. The GoPro app can be downloaded for iOS, Android, and Windows devices.

It’s very handy, and only works with GoPros that have wifi (Black and Silver). And depending on the resolution you have the camera set to, you may not be able to see what you’re shooting AS you are recording.

I’ll cover why in another post, but for now, that’s not important.

What is important, is that I answer your question “Is the GoPro for me (and my family)?”

I don’t know a person on this planet who wouldn’t love to watch a movie of their kids a year from now… 10 years from now… giggling as they learn how to use the water cannon at the spray park… and then realizing they can aim it directly at you and your camera. 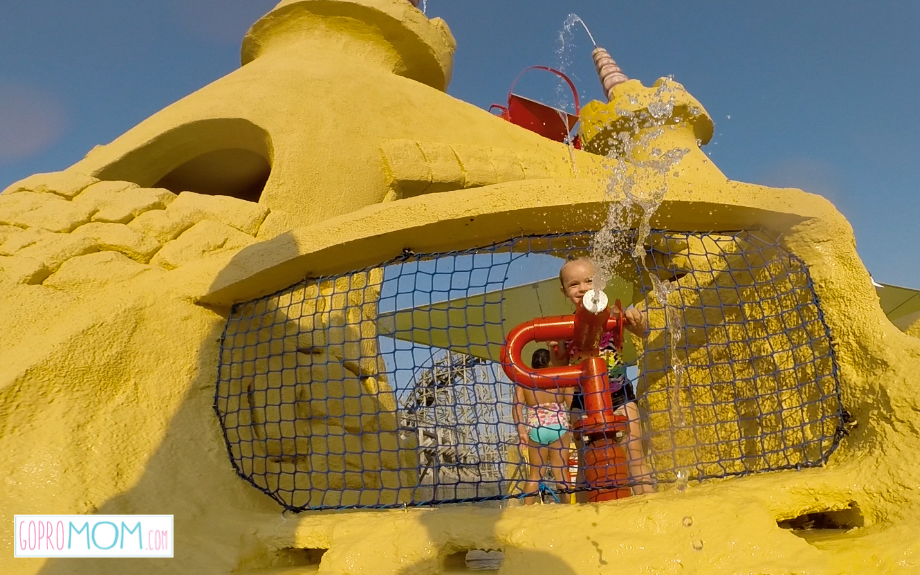 You can’t capture that stuff with an iPhone or a DSLR. Ya know? 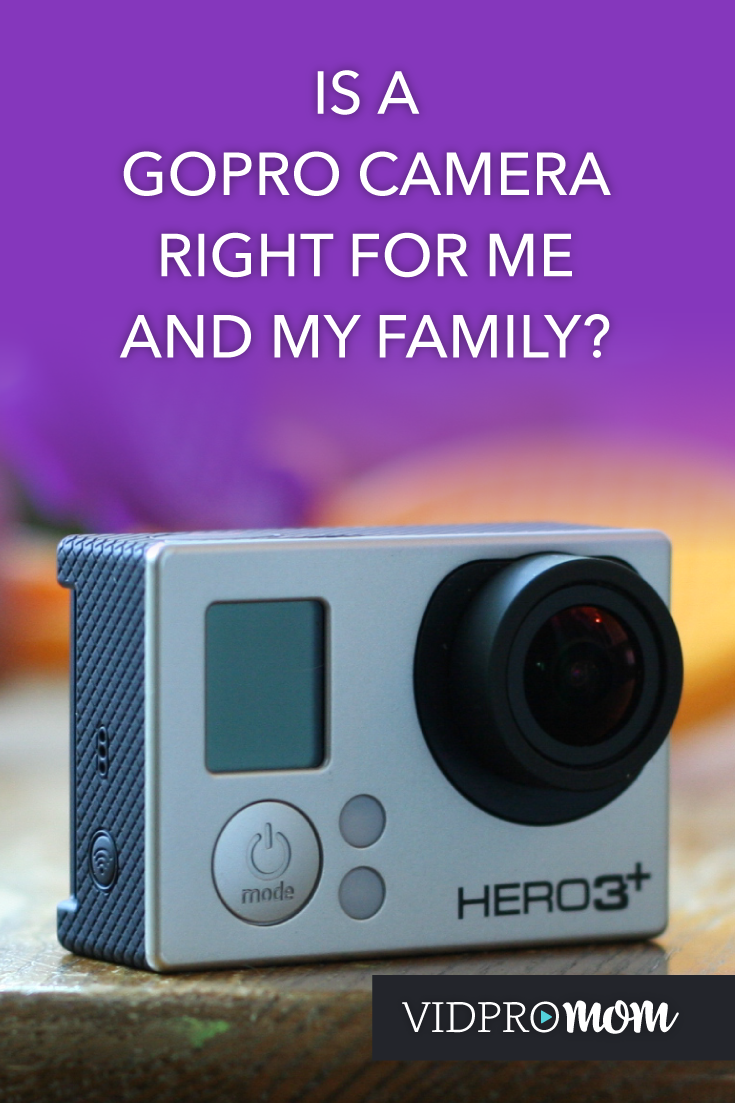 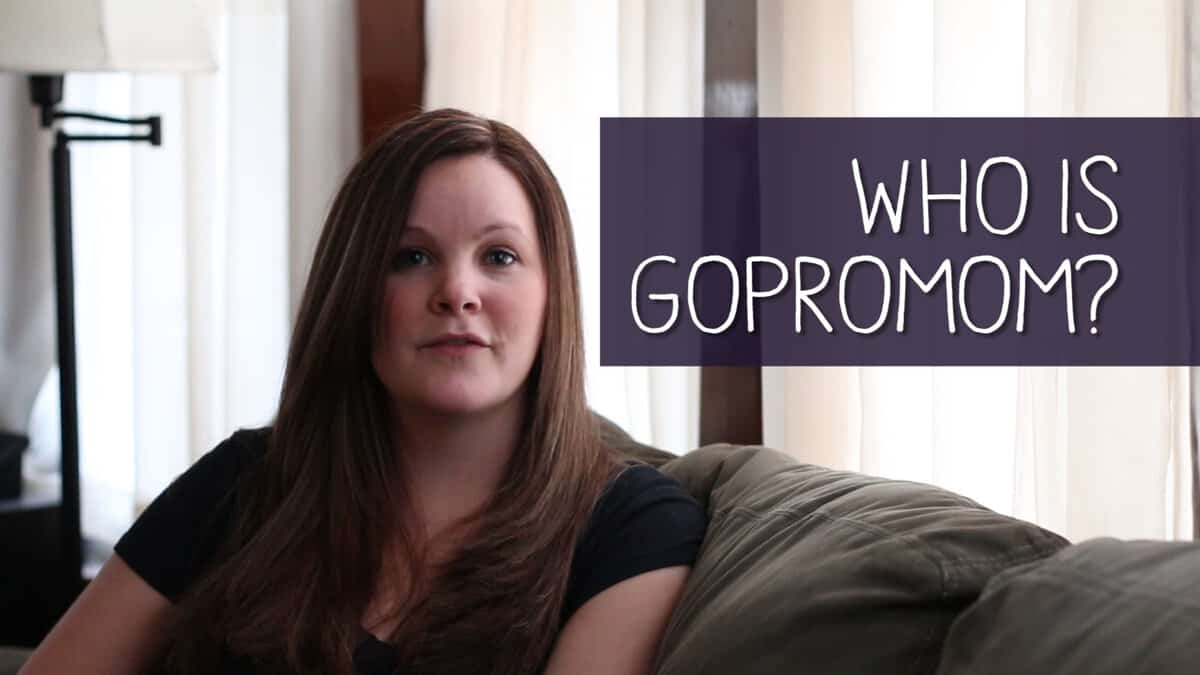